It’s Caroni time again. If you’ve followed this little blog from the very beginning you’ll know that this is where it all started. And surprise surprise, this is where we will go back to time and again. Today we will have a look at the 1996 17YO twin release by Velier.

These two Caronis are the first two Velier releases of the legendary 1996 batch. It’s definitely a top three Caroni vintage in my book and nicely represent the very heavy and ‘dirty’ side of the distillery, albeit in a quite elegant way. It thus shouldn’t be a huge surprise if I tell you that some of my very favorite rums are Caronis from this particular year. But let’s go back to these two bottlings. With the exception of the “Hangar series” perhaps, these are the first Velier Caronis where the style of the label has changed towards, as Luca Gargano says, resembling those of Port Ellen. That is, they moved away from the large title photos to a more classical design and solely a small snippet/ snapshot. Personally, I always loved the ‘classical’, large photo design but the alternative, let’s call it the Port Ellen representation, works for me as well. I just think that many of these photos are so nice that they deserve a better representation but I guess that the perspective (horizontal versus vertical) also has something to do with it. Fredi Marcarini is just a darn good photographer and I highly recommend to check out his website. 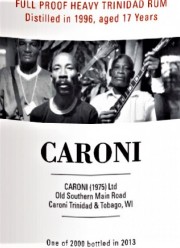 What I have noticed is that a lot of the Caroni hype seems to be all about the Full Proofs (FP) with these twin-releases. On the secondary markets you can usually find quite a big difference in price between the FP and the HP (High Proof) bottlings but most of the time it are only very marginal differences which separate them. But then again this sometimes makes a huge difference in the overall experience. On the other hand, sometimes the HP might be even better than the FP, which has probably more to do with the blending and the exact barrels than the dilution. How about these two releases then?

Colour and viscosity: The HP is tawny and flows back down moderately fast in thick streaks. A thin crown remains. The FP is a bit closer to auburn/ polished mahogany and doesn’t want to flow back down at all. It’s incredibly oily with a few fat pearls.

Nose: I’ve let the rums breath for over an hour. As you might have guessed, we start with the HP. The nose is slightly alcoholic and sweeter than we are used to with the vintage. It is not very intense or concentrated, nor is extremely heavy or dirty. In that sense it is a bit closer to some 1998 bottlings than the 1996s. I get caramel, rusting metal, dried fruits (cranberries!), some vanilla and oak and now more sweeter notes reminiscent of dextrose. The nose is nice but just not really complex. I was hoping for more but maybe my expectations were a bit too high. After nosing back and forth with the FP, I also found slightly sulphatic notes here but I don’t think I would have mentioned them without having the other rum next to it.

The FP is a lot more intense and lovely while not being any more alcoholic than the HP. Jackpot! However, again it is not quite as dirty as subsequent releases of this batch but who really needs that if we get elements such as ripe mango, molasses, caramel, scrap metals or marshmallows instead. Actually the nose isn’t too different from the HP but it is a bit more intense and seems to come with a few more layers. All in all it is a bit fresher than the HP and especially the fruity aromas shine in direct comparison. Nice!

Palate: The alcohol tickles my tongue at first, but more like Ahoj-Brause (the pink one with raspberry flavour) than strong alcohol. Once more this is not really what we expected but that doesn’t mean it’s not good. Now more of the cranberries, mixed jam, rusted metal, coco- and hazelnut as well as light roasting flavours; mild espresso perhaps. It’s quite a bit better than the nose suggested.

The higher abv really adds a lot of value here. We get a similar Ahoj-Brause feeling but this time it is even more intense. Once the sweet tingling stops, I get the dirtier flavours such as diesel, tyres or burnt rubber. This rum is an excellent balance of the sweet, fruity side of Caroni and the dirty flavours. The biggest advantage over the HP is that the flavours are way more bundled, which results in a far better tasting experience overall. On top of that, the entire profile is more to my liking since I prefer the above mentioned balance to the roasting flavour aspect. It all just works together so incredibly well.

For the FP it is even longer, more intense and fruity. It is basically a rather intense extension of the palate with almost no bitter elements, which quite a surprise if you think about it.

Two really great rums with a clear winner for me. In a first tasting session I was quite a bit disappointed by the High Proof but when having these two releases side by side it became apparent that they are actually not really different. As we have it most of the time, the Full Proof just works a bit better due to the higher intensity and here it is no different. Does that justify the higher price on secondary markets? I’d say no and the reason is simple: It’s a matter of supply and demand. Even though the demand for the FPs is probably higher than that for the HPs this is clearly a supply side issue: The number of produced bottles of the FP isn’t even half as much as that of the HP and I truly believe that the majority of the price difference can be attributed to this simple fact.

Other impressions: The High Proof has been reviewed by Lance and Flo, with Lance liking it a lot more apparently. A review of the Full Proof has been written by Henrik while Olivier and Jean-Paul tasted both.