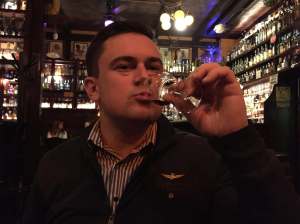 I recently „adjusted“ my quest to buy/ read all books written in English or German on the subject of rum. After now having a multitude of poorly researched rum cocktail books I decided to skip rum cocktail books, with a few well-written exceptions. Anyhow, today I am presenting “The new rum” by Bryce T. Bauer, a book that was published last year. It’s an extension of the book “Rums Revenge” by the same author. It has  314 pages and costs around 23€.

The book is divided into eight chapters and is written as a travel log. Instead of only presenting insights on rum’s history or on rum production, the author travels to rum-producing countries, visits distilleries, talks with people and take snapshots.

Nevertheless, the first chapter is the obligatory chapter on the history of rum, fittingly named “They Call it Kill Devil”, rums early name. In this chapter, he describes his travel to Barbados, an island some claim to be the “birthplace of rum”.  In the second chapter “Rivers of Molasses and Rum” he travels to Guyana, visits the Uitvlugt sugar estate and the Diamond Distillery, describing all the details of sugar and rum production, and giving us some insights on the different stills used at the Diamond Distillery such as the double wooden pot still which originally came from the Port Mourant sugar estate, producing the famous “PM” or Port Mourant mark. The chapter closes with a rather curious Mai Tai recipe, provided by the folk of the Demerara distillery:

This gives the Mai Tai a really different spin. By the way, here is a recipe of the original version of the Mai Tai from 1944. In fact, each chapter closes with a cocktail recipe.

In the next chapter “Jamaican Funk” he travels to, who could have guessed, Jamaica. By the way, did you know that Forbes Magazine estimated in 2008 that Captain Morgan was the seventh-highest-earning pirate of all time, pilfering the modern-day equivalent of US$ 13 Million. Anyhow, in this chapter, he is guiding us through the history of Jamaica and the importance of fermentation in the rum making process while visiting Hampden distillery.

Chapter 4, “Rum Conditioning”, focuses on rum aging and a visit to Appleton Estate Distillery. The “importance” of the next chapter, “Chasing Brazilian Rum Cachaça”, can’t be overstretched, since this topic is really underrepresented in the current rum literature. Brazil still has such a huge and lively heritage when it comes to the production of Cachaça, where so many farms still produce their very own. The really nice thing is, he is not only describing his visit to some trendy artisanal Cachaça producers but also a visit to an illegally distilling small farmer-producer, giving some good insights into his small-scale Cachaça production process.

In Chapter 6 “Whose Rum is the Real Rum” he describes his visits to the famous rum blender and seller E&A Sheer at Amsterdam and to the Stoneyard Distillery which produces a spirit made of Colorado beet sugar, wrongly called rum for some time, as well as picking up on the “added sugar” issue.

In Chapter 7 “Let’s Have a Drink” he continuous the “added sugar” discussion and the intrinsic value of rum followed by some notes on Tiki and other Rum cocktails.

The book closes with chapter 8, “The Rum Guide”, where he presents 43 Rums and Cachaça brands. It’s a good overview of the current (2018/19) available Rum brands. He did not forget to mention that Zacapa’s rums frequently come up high on internet list for rums with added sweeteners.

Well, so do you need this book? Yes, yes and yes. Even the “know it all” rum geek can learn a thing or two while reading his book.