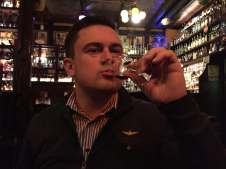 Today I am reviewing what some might call the book on the history of rum, Wayne Curtis’ “And a Bottle of Rum”.  It was firstly published in 2006 and has since, judged by how frequently it appears in pictures on rum related Facebook groups, been very popular with the rum crowd. In July 2018 a revised and updated version hit the shelves. I will review the revised version but will also briefly compare the old to the new version at the end of the review.

Let’s start. The book has 305 pages and costs around 15€.  The author, Wayne Curtis, has written frequently on the subject of spirits and cocktails including for the more than excellent Imbibe magazine. You can find an interview with him here on how he wrote the first edition of this book and how the rum world has evolved since then.
But back to the book. It starts with an introduction, appropriately called “Molasses”, which is followed by ten chapters. Each chapter is dedicated to a particular rum drink, representing an era of North American progress. A really genius way to structure a book on the history of rum in my opinion.  The book concludes with “A thumbnail Guide to Rum” where he very briefly highlights 15 different rum brands and in “When it’s Cocktail Time” some cocktail recipes are presented as well. Let’s have a closer look:

The first chapter starts with the invention of rum (most probably) in Brazil, followed by its arrival in Barbados, where rum was firstly described, in those days, as “Kill Devil”. Chapter two describes the decades of the pirates and in particular the life of the pirate captain Henry Morgan, whose history is well-known thanks to a Dutch book from that time. Ironically, for a pirate whose name is printed on millions of millions of bottles of (spiced) rum, the book does not mention any rum. Also, the rum ration of the British Navy is mentioned and the order by Admiral “Old Grogram” Vernon to dilute ration with water. When lime juice was added later, the mix of water, rum, and lime became known as grog. The third chapter describes the prevalence of rum in the everyday life in the North American colony.

Chapter four is set in North America during the time of the American Revolution, with the ‘molasses act’ being an important topic. It also describes how rum from Medford Massachusetts became known for its superior quality. Chapter five discusses the terrible triangular trade, the transatlantic slave trade, in which rum was brought from North America to Africa in order to buy slaves, who in turn would be brought to the Caribbean to produce sugar, the molasses of which was brought to North America to produces rum. Chapter six touches on the topic of prohibition, which had a long history until it became a nationwide constitutional ban in the USA between 1920 and 1933.

Chapter seven focuses on Cuba and its rum, which became a refuge for many North American bartenders during the time of the prohibition and a favorite holiday spot for Americans looking to imbibe themselves on rum. Chapter eight not only focuses on rum and coke, which has been “invented” in Cuba, but it also has a very informative part on cocktail bitters. Chapter nine, titled “Mai Tai” (probably one of the best cocktails ever), is about the rise, fall and resurrection of tiki. The section concludes with a chapter on Mojito and the state of the rum world today. It also has a part on a visit of Wayne Curtis to Stephen Remsberg’s house, who owns one of the largest collections of historical rums. By the way, Plantation is honoring Stephen Remsberg with a very special release.

Comparison with the 1st edition

Chapter 8 – Rum and Coke: Some further information on bitters at the end of the part on Angostura reflects on the fact that so many more bitters are commercially available today compared to 2006.
Chapter 9 – Mai Tai: Some further information on the tiki revival, which started around 2010, has been added.
Chapter 10 – Mojito: A bigger revision. He omitted a whole part of the chapter. In the first edition, around five pages are dedicated to the “super premium rum” Zacapa with lots of praising words such as “best commercially available rum today”, “98 Points at the Beverage Testing Institute in 2001, and it remains the highest ranking rum ever rated”, “benchmark rum”, “extraordinary” and so on.  Interestingly, he also writes “I have seen bottles of Zacapa hidden on shelves in the offices of competing West Indies distillers, who have sheepishly admitted they were striving to reproduce it, as yet without success”. Hint: Glycerol and sugar were the secret ingredients. If you haven’t read it yet, read this very excellent article on this issue by Cyril.
Thank god, the days in which artificial solera rum were considered top-notch and real craftsmanship are gone and true quality is valued once again. If he wouldn’t have omitted that part in his revised edition, it would be considered a true flaw in this day and age.
The Zacapa part has been replaced by a description on Privateer Rum and its master distiller Maggie Campbell and the sophistication in the rum market (Appleton’s Joy release, Mount Gay 1703 Master Select and the “resurrection” of Jamaican rums).  If you want to read further on Privateer rum, which I urgently have to try, read this informative article by the Cocktailwonk.

Some changes were made as well in the “A thumbnail Guide to Rum” part of the book. While the first edition starts with “Hundreds of rums are available around the world”, that became “Thousands of rums…” in the revised version – another hint that the rum world has significantly progressed in the last decade. Similarly, while the following rums were presented in the first edition: Appleton, Rhum Babancourt, Ron del Barriito, Rhum Clement, Cruzan, El Dorado, Mount Gay, Niesson, One Barrel, Prichards, Pampero Aniversario, Pyrat XO, Santa Teresa 1796 and Ron Zacapa;- One Barrel, Prichards and Pyrat XO aren’t even mentioned in the revised version. The last one isn’t even considered rum anymore. Even on their own label they now state “Caribbean spirit” instead of rum. Instead, the following rums/bottlers were added: Banks, Sixteen, Hamilton, Plantation and Privateer.
Lastly, some cocktails have been replaced in the “When it’s Cocktail Time” chapter.